Sponsoring our rabbits is the best way to support SNORS long term. It provides us with a regular income to take care of the bunnies by paying for veterinary care, medications and special equipment. Special needs bunnies are costly so supporting us in this way gives the bunnies a secure future as well as helping SNORS make plans to help others.

Whilst we have many rabbits in the sanctuary we only offer sponsorship of two pairs.  This is to reduce the amount of time we spend doing updates so we can use our time to care for the rabbits.  Your sponsorship funds are used to care for all rabbits in our care, not just your chosen rabbits

Your regular donation will be used entirely for veterinary fees and in return you or your gift recipient will receive: –

Pip arrived in 2016, she is an elderly rabbit approximately 11 years old. She came from a rescue with a large number of rabbits which could not be rehomed because of complex health needs. Pip is totally blind, has symptomatic E. Cuniculi, suffers from pasteurellosis and has significant scaring to her lungs. She also has had occasional bouts of GI stasis. She is still a happy girl and loves nothing more than snoozing fully stretched out in her heated pet bed and she just loves her food! She is currently being bonded with another EC bunny called Leo.

Leo came to us in 2017 after he developed severe EC symptoms. He is slowly recovering but will always be vulnerable to EC episodes and is left with a slight head tilt. The bonding process between these two is ongoing, although they clearly like each other Pip is an old girl and doesn’t always tolerate his advances. 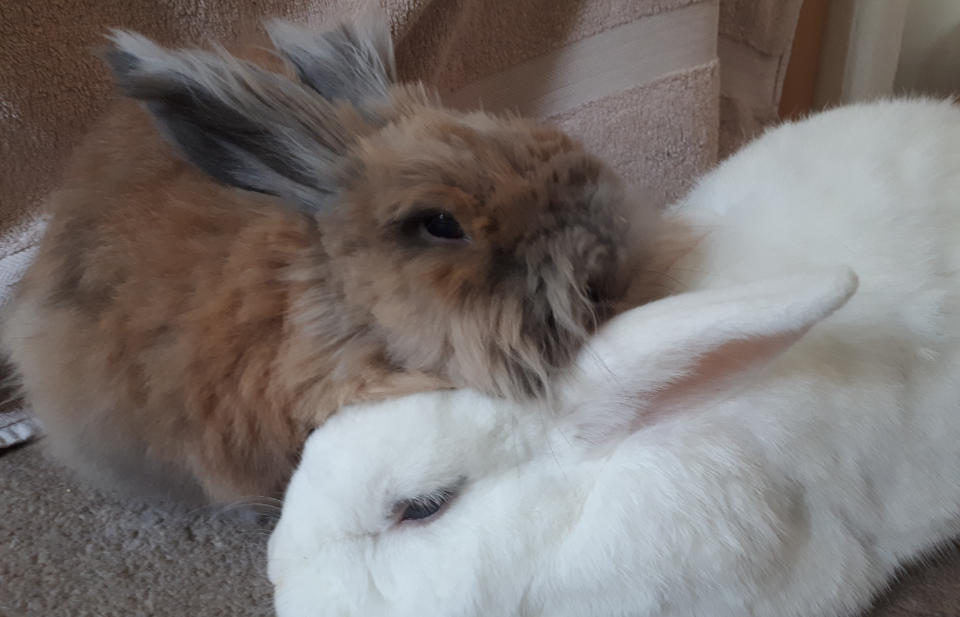 Soon after arrival at Snors, Ginger was bonded with Freddie. Both bunnies had infected tear ducts, dental issues and wouldn’t eat hay. After diet modification and veterinary care both rabbit’s tear duct issues resolved and their dental issues stabilised and they both were able to eat lots of hay.

Sadly, Freddie passed away December 2018 after battling ill health for a number of months. Soon after Larry lost his partner Lucy, so we decided to try to bond him with Ginger. We were delighted when Ginger and Larry quickly became friends and amazed that Ginger has since taught him to eat hay! Even though he had a good diet since arrival Larry never ate hay until he met Ginger!

Both rabbit’s dental issues now seem to be under control with a good diet but they will need very close monitoring in the future which they will receive at Snors.

If you would like to sponsor, email snors_enquiries@yahoo.com with your name/ address and chosen sponsor rabbits name.

We will  then reply with our bank details and you will then need to call your bank and set up a monthly standing order.  Please ask for you full name to be given as the reference.